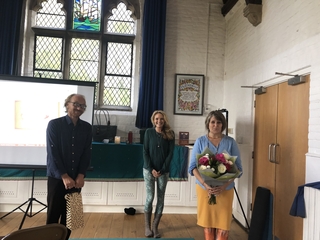 We were very fortunate to be able to welcome Dr Jason Birch and Jacqueline Hargreaves as
guest tutors on our BWY TT course. Jason is a lead researcher on SOAS universities Haṭha yoga project.
This is a five-year research project which aims to chart the history of physical yoga practice by means of philology, i.e. the study of texts on yoga, and ethnography, i.e. fieldwork among practitioners of yoga.
The Haṭha yoga project's primary research is the study of ten sanskrit texts on Haṭha yoga. One being the 18th C Haṭhābhyāsapaddhati.

'The most remarkable feature of this text is its section on āsana (yogic posture), which contains six groups of postures, many of which are unusual or unique among yoga texts. Another unique feature of this section is that the postures appear to be arranged into sequences intended to be practised in order. A manuscript of the text exists in the Mysore Palace; this (possibly along with other texts) was the basis for the illustrated āsana descriptions in Mysore's famous book, the Śrītattvanidhi. It is highly likely that the Haṭhābhyāsapaddhati was known to the most influential teacher of 'modern postural yoga,' T. Krishnamacharya, and therefore has a special significance for certain schools of transnational yoga'.(Birch & Singleton 2019).

Jason and Jacqui delivered a very informative talk on how they discovered this remarkable text and its relevance and importance to yoga within a historical context. This was followed by a fantastic āsana session bringing the postures to life. As well as being a scholar Jason is also a very adept yogi and gave us demonstrations of how some of these complex and very challenging postures should look. Not before Jacqui skilfully attempted to teach us some of the strangely named āsana ourselves, including; The hatchet pose, the iron bar pose and the pawing the leg like a pull pose amongst others. We didn't quite manage all 112 so there is plenty more practice to be done!
Our heartfelt thanks go to Jason and Jacqui for such a fun, informative and very enjoyable morning.

References:
Jason Birch and Mark Singleton (2019). THE YOGA OF THE HAṬHĀBHYĀSAPADDHATI: HAṬHAYOGA ON THE CUSP OF MODERNITY . Journal of Yoga studies 2019 Vol 2.